The Empire of Soga Faction Designs

When it comes to the Empire of Soga, it is not too difficult to notice, that the empire is largely inspired by late medieval and feudal Japan.

Therefore, when designing them and their looks, we wanted to consider how they developed to the current point in time (of the setting), using the history (of our world) as an example. One thing we were cautious about is that we didn’t just grab different elements from different time periods and lump them together, but instead combined different pieces of her outfit that could coexist in the same time period, or at least choose them logically.

As we did not want to romanticize and generalize the portrayal of East Asian aesthetics and culture, we wanted to portray our Japanese-inspired faction realistically, keeping in mind historical accuracy and cohesion, given our background in historical and East-Asian studies. We tried to keep all of the designs grounded in realism because we believe it helps with immersion and relatedness. However, as the setting is fantastical, we did distort reality to some extent by adding magical and some purely aesthetical elements.

Ok, so enough with the philosophy, let’s look at one of our models I want to talk about first; the Onitaoshi.

The Design in General:

Click here to see her full profile and the mini in detail!

The name Onitaoshi (鬼斃し) comes from combining two words: oni (鬼), a name for ogre-demons, and verb taosu (斃す), meaning slaying or felling. When put together, they mean the Demon-slayer or the Demon-feller.

So, as the name and their lore suggest, the Onitaoshi are professional hunters of big ogroids, offering their service mostly to the northern, cold parts of the empire. The population of the empire is predominantly human, where only a handful has the gift of magic. The Onitaoshi are an example of humans, who have to rely solely on their skill and tools; this is exactly what we wanted to show in the design.

We imagined the representative of this profession to be resolute, tremendously skilled, well-armored (they receive generous rewards when completing a task), and equipped accordingly to deal with much bigger or numerous opponents. 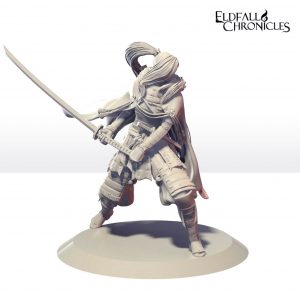 The garments she is wearing under her armor, called hitatare and hakama, are pretty standard for warriors of the Empire. She is wearing an armor of lacquered iron and steel, resembling Japanese armors of the tosei gussoku class of the late medieval period (Sengoku jidai). The cuirass is tailored to fit her feminine shape better (to allow comfort), but still not so much that it would lose functionality, mobility and or the ability to deflect attacks. We decided to leave the sode pauldrons out to enhance the mobility of the arms. Chainmail, sewn onto fabric backing, was added to protect the areas where solid armor cannot be placed. We also equipped her with a manto traveling/riding cloak (popular amongst warriors of the late Sengoku period) with a pelted collar, to keep her warm in the boreal North.

So apart from not wearing a helmet (purely for aesthetical reasons (we might add it later!)), she doesn’t have many parts exposed and will be one of the most heavily armored models in the early game.

We armed her with a short sword that is tucked away on her hip for personal protection in daily life and in battles in tight spaces. Her main weapon however, is the Ōdachi greatsword (which she carries on her back most of the time and has to pull out prior to battle. Note: pulling it out amidst a heated battle would be rather impossible in reality). It is ideal for dealing deep wounds to larger and less-armored targets. In the game, this will allow her to gain a melee reach advantage even over several models at once, while potentially dealing them grave, bleeding wounds.

Our sculptor really managed to capture her in the moment when she is launching herself from a shimohassō stance, and did a fantastic job at translating my scribbles of her to the sculpt.

Without unpublished rules it might make little sense, but here is a sneak peek of the Onitaoshi stat card:

This would be all for this entry. Thank you for the read and hope you liked it, let us know if you want more content like this! Have a nice week!

P.S.: Oh, and if you like the idea of Onitaoshi with a helmet, don’t hesitate to let us know on our social media!

Sign up for the Newsletter!
We use cookies on our website to give you the most relevant experience by remembering your preferences and repeat visits. By clicking “Accept All”, you consent to the use of ALL the cookies. However, you may visit "Cookie Settings" to provide a controlled consent.
Cookie SettingsAccept All
Manage consent