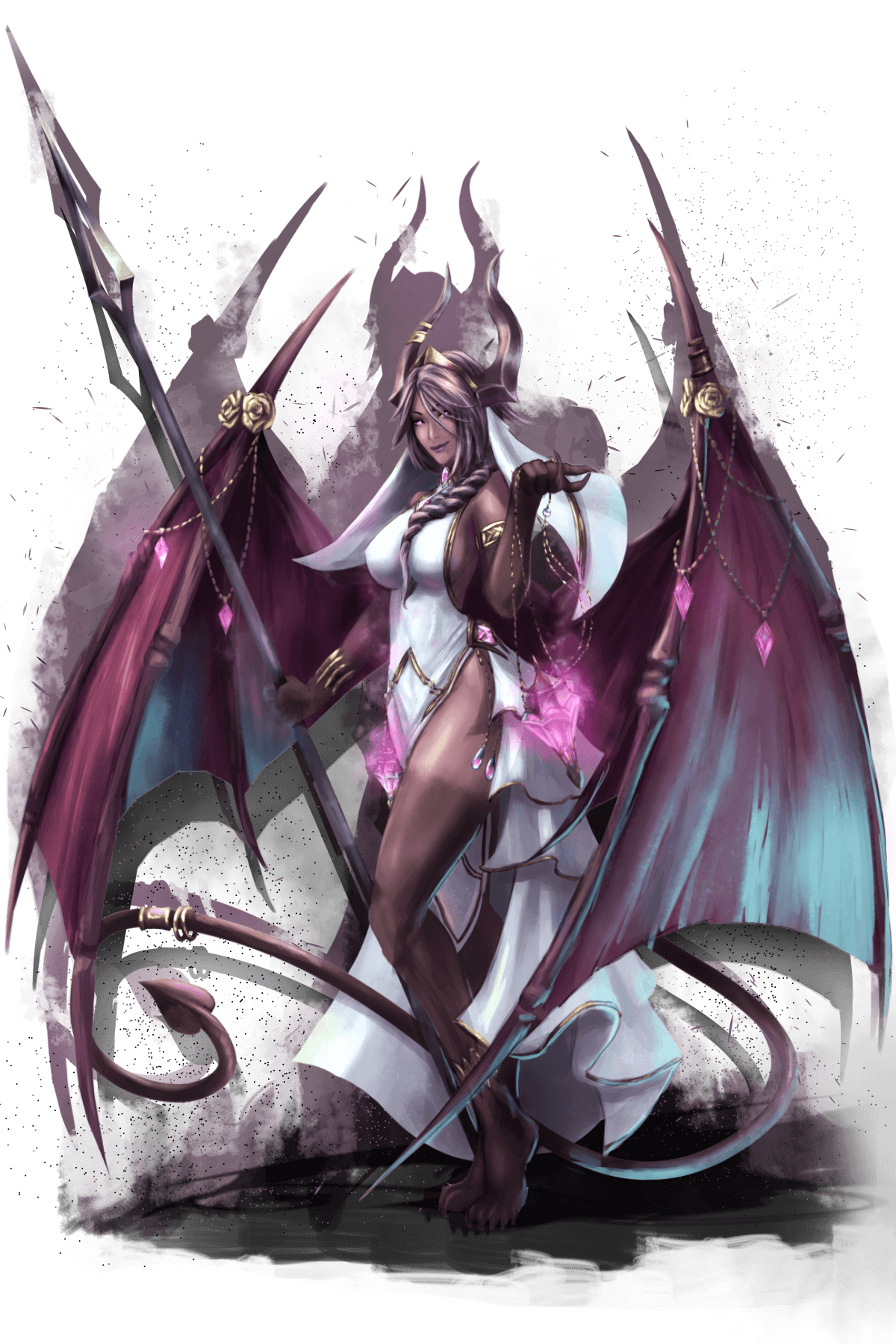 The Night Temple is a spiritual institution, similar to other temples of the seven patron gods. These are considered to be guilds and are present in almost every Thenian city. The temples of the night are dedicated to Astoreth, the goddess of love, fertility, lust, and more. Since the dawn of time, the succubi and have overseen and safeguarded the rituals of fertility and kinship in her honor.

The succubi* are daemons hailing from a time before the Elders. They are the embodied heralds of their mother-goddess Astoreth, with whom they share their alluring resemblance. While most daemons were war instruments of the gods, the succubi never truly enjoyed combat. In general, they are peaceful beings, who cherish comfort and pleasure. When enraged, however, their daemonic lineage becomes apparent.

Succubi are old and eternal but are seldomly concerned about their past. Recognizable by horns of various shapes and sizes, and slender tails, their main feature is their imposing wings. They possess the unique ability that allows them to manipulate the mind. Likewise, they are able to alter their perceived appearance into the image of someone’s most desired person. This aids them when comforting worshippers, but also allows them to charm their prey if they are pressed into violence. It is also said, that they can feed on one’s emotions and desires, draining their life force away. Sometimes, a person, looking like they lost all the will to live with indented cheeks and hollow eyes is seen exiting the temple. There are many myths circling the succubi; some even suggest, that an infatuated succubus can turn the mortal into a high vampire by draining their life force. If they infuse them with their own love and vigor, the mortal becomes an eternal companion.

It is unknown when the Thenrin first encountered the succubi and when they became an integral part of their society. However, the Night Temple has remained a pivotal element of the Thenian culture since the reestablishment of their civilization.

Coalition of Thenion Units
All Units
We use cookies on our website to give you the most relevant experience by remembering your preferences and repeat visits. By clicking “Accept”, you consent to the use of ALL the cookies.
ACCEPT
Manage consent

This website uses cookies to improve your experience while you navigate through the website. Out of these, the cookies that are categorized as necessary are stored on your browser as they are essential for the working of basic functionalities of the website. We also use third-party cookies that help us analyze and understand how you use this website. These cookies will be stored in your browser only with your consent. You also have the option to opt-out of these cookies. But opting out of some of these cookies may affect your browsing experience.
Necessary Always Enabled
Necessary cookies are absolutely essential for the website to function properly. This category only includes cookies that ensures basic functionalities and security features of the website. These cookies do not store any personal information.
Non-necessary
Any cookies that may not be particularly necessary for the website to function and is used specifically to collect user personal data via analytics, ads, other embedded contents are termed as non-necessary cookies. It is mandatory to procure user consent prior to running these cookies on your website.
SAVE & ACCEPT