Preface from the Introductory Manual of the Grand Academy

When telling a tale of old, there are various aspects to consider. One is that history is often recorded and eternalized by the victors. And two, try as we might to understand and control it, history is an elusive mirror of today’s world. To call it known it to be a simpleton.

We call it the Elder Age, for there are tales that tell us of ancient times when the half-beings called the Elders reigned. They had insurmountable power and with it, they created the first sapient civilization, the predecessors of the Rin peoples. They were not the only ones to be created, however. As you know, other sapient tribes that inhabit this world, like the Centaurs, Kitsune or the Trolls were created as well. Along with all creatures, the Elders created the Arcanum, a tome of ancient knowledge of Arcana, or rather, Magic. I reckon you are quite new to Arcana. You will soon learn more about this, but for now, I will tell you that mana, the driving energy of the universe, the basis for Arcana, is omnipresent in this world of ours called Calad.

In the legends, the Elders thought of themselves as gods. And as gods are all-knowing, they sought to fill the pages of the Arcanum with any and all droplets of knowledge that they could gather. They traveled other worlds and planes of existence but as all things have a negative side, they encountered anomalies that rendered their minds torn and twisted. Now even more consumed with a hunger for the unknown, they opened a door to yet another realm at the center of our world; hearing that it was the answer to their questions. But this realm is in fact not a kind one; it is filled with a dark substance, that gushed to our world. Corrupted forces and nightmarish creatures came with it. And the evils the Elders could not contain tainted their very essence. Ancient Rinian tales suggest that the Elders vanished at that point; if they died or are merely unseen, we do not know.

Anyhow, the civilizations were left to fend for themselves. The dark miasma was noxious; all life started to wane away at its touch. It covered the sun and engulfed the land below into what seemed an everlasting night.

This forced all being to flee in pursuit of refuge, leaving their pasts to be buried by the earth. This era of global strife and venture we now refer to as the Age of Dusk, an era of prevalent darkness that almost ended all civilization. But life found a way as you can see. The Rin, which at the time accounted for most notable civilizations, went separate ways and found survivable land.

But as if the old gods themselves jeered at the realm, as soon as the darkness began mysteriously dispelling, Calad was struck with an invasion from another realm. Here I stress again that the accounts of these instances are confusing at best. My speculation is that the foreign invaders came from the portal at the center of the world, from which the dark miasma came. But we might never know the details.

The invaders, that called themselves Men had no pointed ears like the Rin have, sailed on massive vessels and asserted the righteousness of their quest: to hunt and slay any being they came upon. Their thirst for blood and their crazed aggressions ushered the world into the blood-soaked Crimson ages.

Hearsays from the front lines told that the invaders somehow tamed the dark miasma, but that they accused us of being the cause of it. I do not know the truth behind, however, something of this world seems to have kindled their hatred.

The natives of Calad fought courageously and after years passed, the mass killing came to a halt. Through decades of stagnating conflict, even the newly established northern colonies of foreigners, in unison with the local tribes, started to rebel against their rulers. Why is this, you ask? Firstly, the invaders were tyrants. As it happens, they were also susceptible to inner strife: the invading forces were split into two sides and one of them joined the native Caladians in battle against the other.

In these shared endeavors, the Rin peoples joined with the foreign rebels, successfully drove the invaders through the center-gate, and sealed the planar gate behind them.

From the colonies rose the great Empire of Soga, stretching over the northern continent.

Eastward, on a volcanic landform, the Coalition of Thenion was formed and rose to prominence.

On the southern continent, the Helian League displays its strengths and strives to restore order to the rest of the war-ravaged realms.

And amidst the western dunes, mighty and prosperous, yet mysterious in origin, the Sand Kingdoms made themselves renowned to the world – although they seem predominantly menfolk, their relation to the colonials is unknown.

Following the treaties after the repelled invasion, peace is now fairly abundant. The factions remain associated and have established connections, frequented by merchants and travelers of various interests. Nevertheless, as conflict is always hard-wearing, skirmishes among and within factions are not uncommon; this is a world that still clearly remembers war. And as it is full of olden remnants, secrets, and powerful objects, motivations for battle are never scarce.

Well, novice, now it is your turn to tell me of your purpose and aims in this world…

–   Preface from the Introductory Manual of the Grand Academy 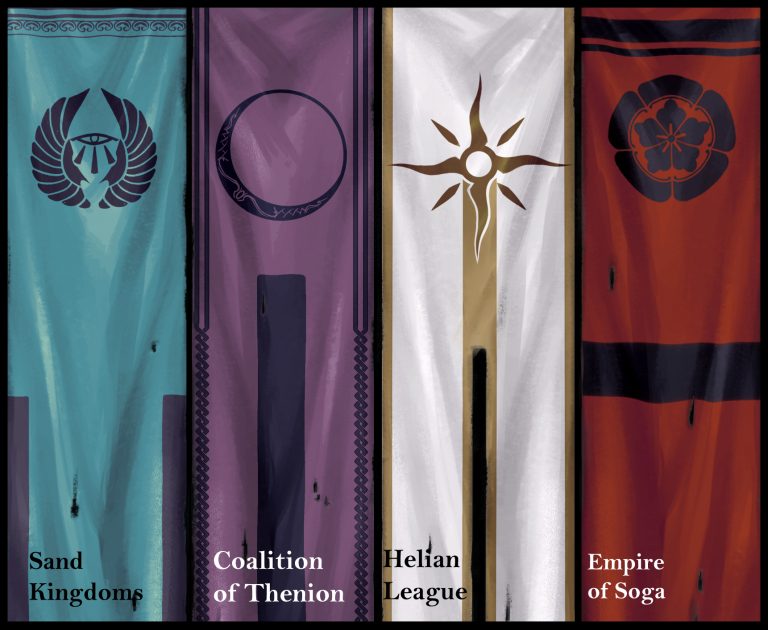 We use cookies on our website to give you the most relevant experience by remembering your preferences and repeat visits. By clicking “Accept”, you consent to the use of ALL the cookies.
ACCEPT
Manage consent